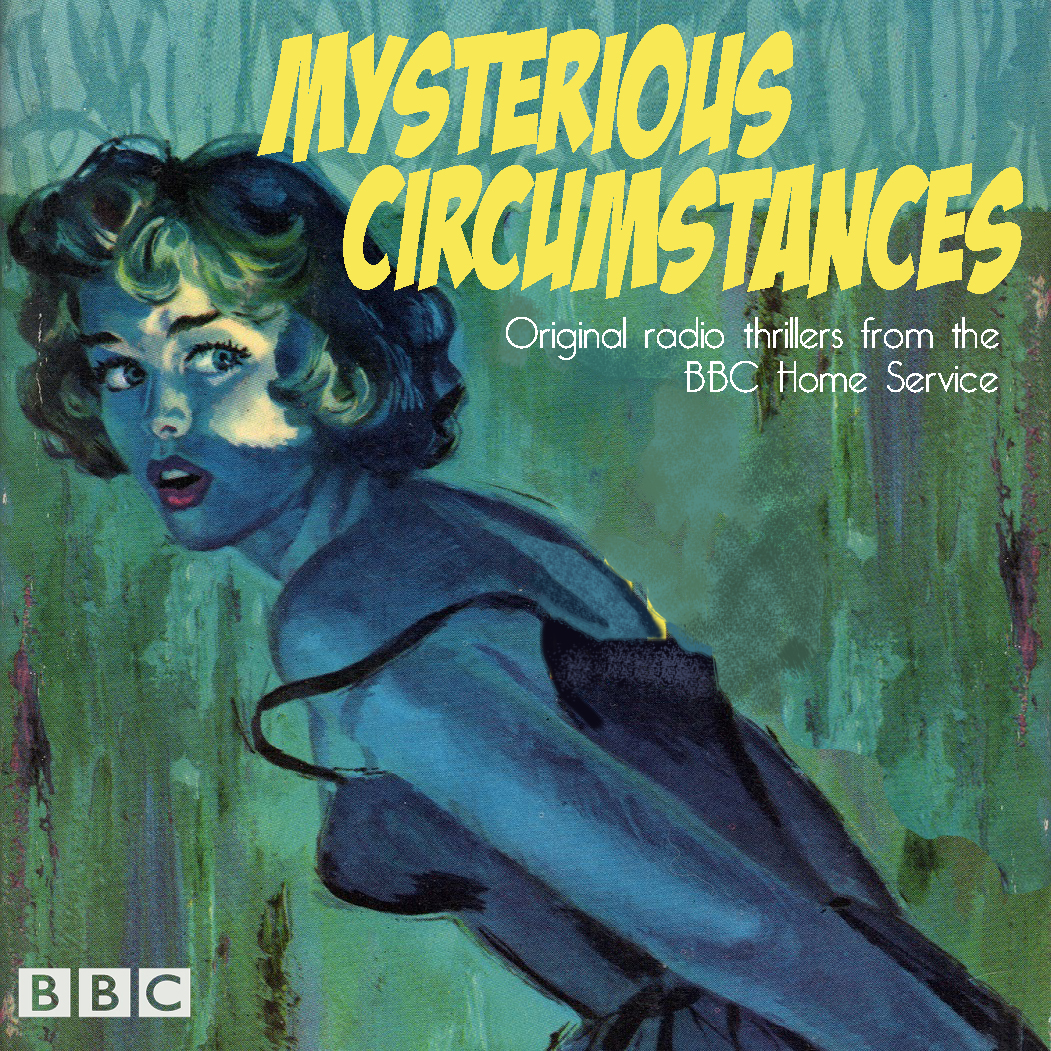 The MYSTERIOUS CIRCUMSTANCES title was used to group a series of 26 half-hour radio plays distributed by the BBC Transcription Service. The thrillers were either recorded for BBC Transcription Services or taken by them from the BBC's main archive — some may never have even been broadcast within the UK itself. I’ve uploaded the 18 I have — unfortunately many are in poor sound quality but a few are very good. I've posted FLAC (lossless) files when possible. If you happen to have better sounding versions of any episodes, I’d love to hear them, and I’d especially love to track down the episodes I don’t have:

Something To Fear (John Graham)

Here’s a list of the episodes included here, along with 2 additional programs (“The Secret Sharer” and “Fiddler of the Reels”) which aren’t part of the official Mysterious Circumstances series, but sound very similar.

Shadow of a Magnitude [by Michael Robson]

Ruth Farrell visits a wealthy drug manufacturer on the pretext of buying his house. Once alone, their civilized conversation reveals the violence she has been concealing.

A mild mannered archaeologist has made an astounding discovery of an untouched burial vault. Adapted by R J B Sellar from Sir Arthur Conan Doyle's story and produced by R D Smith. Benchley.

In a Tyneside pub, a couple discuss the child-murders in their neighborhood. Outside, their little girl befriends a stranger and goes off with him. Produced by Robin Midgley

The adventures of a successful crime novelist who is inclined to confuse fact with fiction. Produced by Martin C Webster

A less than merry grave-digger is persuaded to change his ways.

The Boxing Day panto was going to be a flop - even for Bruddersford. But then the Demon King came on… Ian Wallace stars in JB Priestley’s vintage comic drama.

Other parts played by members of the BBC Drama Repertory Company

“All I ask of a partner is that he shall hold me firmly, take me round steadily, and not get tired before I do.” When a group of young women complain about a lack of dance partners, a toymaker gets creative... Jerome K Jerome's eerie tale adapted by Michael and Mollie Hardwick.

Two gentlemen who enjoy Irish women fall under the spell of the mysterious "Lady on the Grey" and are both determine they should conquer her. Have they met their match? Adapted by Michael and Mollie Hardwick from John Collier’s short story.

Hetty Mingle ignores her dying mother's advice about fortune hunters. Will she end up regretting it? Adapted by Michael and Mollie Hardwick from Marie Belloc Lowndes and produced by Charles Lefeaux.

'What see you in the comer of the court, that you fix your eyes on it and not on me, your Judge?' Will the trial of Squire George Martin need help from beyond the grave to convict him of murder? Adapted by Michael and Mollie Hardwick from M. R. James' story and produced by Charles Lefeaux.

The Dover Road has a fine romantic ring and the very name would seem to spell adventure for the traveller on it. Produced by Archie Campbell

When the wife of an engineer decides to leave him he plans to murder her. Retribution is the theme of this play about the planning and execution of the almost perfect crime. Produced by Martin C Webster

A desperate young man murders an antiques dealer... and then meets a stranger who demands his soul! "Murder is no special category. All sins are murder as all life is war. I have no interest in evil acts - only in evil men."

Is Robert Craig just accident prone or is something more sinister going on? Produced by Margaret Etall

There's a reservoir nearby which was formed by flooding a neighboring village. She believes that on the anniversary of the death of that village, its church bell tolls and voices can be heard calling...

A tale of a sea captain and a mysterious stowaway. Dramatized by Robert Forrest from Joseph Conrad's story and directed by Patrick Rayner for BBC Scotland

Fiddler of the Reels [by Thomas Hardy]

The power of the "fiddle" and fiddler can change lives and alter destinies.

I am just running `The Demon King´ episode through my own software. I could only be a minor help on clarity & loudness, though I tend to use higher encoding than 128kb (or m4a files).

On the good side: Your files seem by far not as bad, as plenty of the OTR attempts at restoration of outdated recordings.

Sorry, but that would be several hours of unpaid work, and being on a mobile I would need test listeners for speakers & headset, to find an equalizer-compromise worth calling an improvement.

Also: My contacts are a bit too young to help you on the episode you miss, but I will try to check that, too. No promises, as said: I am not in a good position to help anyone.

Add-On: I found no trace of that show, nor mention of the title `Something To Fear (John Graham)´ used for testing. Sorry.
Reviewer: Alyosha48 - favorite - January 3, 2022
Subject: To Elpenor
Just to say, one is confident you are aware however;
Tune into BBC 4Xtra where there are myriad dramas to suit most tastes. Alternatively download the BBC sounds app and you can search to your hearts content.

Personally one is not a fan of the BBC, they have long since abandoned any element of ‘independent news reporting’ or indeed of being impartial. They are given over Lock Stock and Barrell, to the current ‘woke’ ideology.

As a consequence I have written to them to cancel my tv licence; resulting as any Brit will tell you; Not paying the BBC makes it illegal to watch any television broadcast, whether satellite like SKY or terrestrial like ITV. Doing this has been refreshingly intoxicating, it’s remarkable how we have become addicted to always having ‘the box’ switched on whether we watch it or not!!!

I highly commend every law abiding Brit to cancel their tv licence and enjoy a life that does not include television..
WHAT JOY!
Reviewer: Elpenor&apos;s Ghost - favoritefavoritefavoritefavorite - November 17, 2021
Subject: Well worth a listen.
Since my teens I have enjoyed listening to the plays and short stories on BBC Radio 4. The plays in this selection are mostly from before my era and therefore especially interesting to me. The sound quality, apart from the first two plays, is pretty good considering the age of the recordings, I wish Radio 4 would go back to broadcasting more plays like this, which aim primarily to divert and entertain,the listener for a bit, nothing more.

Uploaded by ThePaleWriter on September 8, 2020